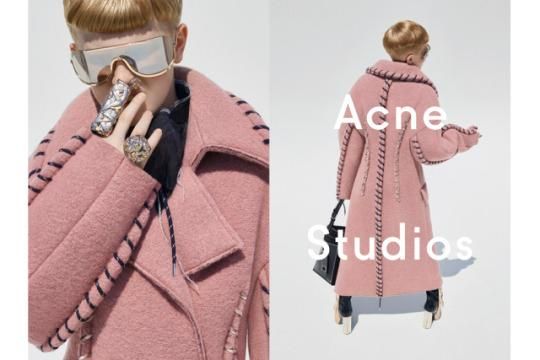 Jonny Johansson, Acne’s creative director (and also the model’s father), asked his son to be a part of the campaign because he believes the boy represents the “new breed” of consumer, for whom the “cut and character” of clothing is paramount, “rather than seeking approval from society or [following] set norms.”

Indeed, the ads are part of a larger movement toward androgyny in fashion that’s interesting and liberating in some ways. And the ads are certainly cheeky and cute. But there’s also something troubling about using a 12 year old kid to sell adult women clothing — and really expensive clothing at that. Not many teenage and 20-something women can afford the $1,200 coats and $400 sunglasses Acne traffics in. The older women who are these ads’ target at least have some hope of seeing themselves in a 25 year-old model with an adult body with some curves (however scant). Seeing a 12 year old boy posited as our ideal feels, frankly, like a bit of an insult. Make that a $1,200 insult.

So, there you have it. Pre-teen boys are the new ladies. Maybe next season, designers will do away with that inconvenient third dimension altogether and make actual, 6-foot tall clothes hangers. We hear Hedi Slimane is heading up the research from his laboratory in Paris.