J.W. Anderson decided to “slow the tempo” with a more contemplative collection for spring 2016, crafted mainly in calico and dark denim.  Asymmetric panels and funnel necks on loose, smocklike tops were a nod to David Bowie, said Anderson, who put everything over gently ballooning, cuffed and cropped “fisherman pants” with rows of pleats below the waistband.  The gentle colors, crisp shapes and spoken-word soundtrack by American composer Robert Ashley cast a spell as surely as Bowie’s dreamy “Space Oddity.” It was an collection that recalled the more refined uniform of a fencer.

KTZ designer Pejoski said in his show notes that he’d wanted to work with “unusual industrial materials,” among them paper, rubber, aluminum and electrical tape, and the clothes looked more like objects that had been soldered together in a workshop than cut from material. One trenchcoat was made of panels of translucent white plastic and shiny black PVC, with seams in bright red and royal blue, while an oversize bomber was done in silver foil with net patches, and paired with matching shorts. Pejoski paired the looks with thick-soled walking sandals in shades of red, blue and bright white, which added to a graphic comic-book mood.

Topman Spring 2016 collection featured Models in high-waist, wide-leg pants that were  paired with tank tops patched with embroidered badges. Pants came in colors that ran from muted pink, khaki and denim to bold “Beetlejuice” stripes. There was a Formula One influence circa the 80s influences that came through in skinny nylon pants with side stripes, leather bomber jackets – including one in hot pink – and shiny Windbreakers in panels of blue, turquoise and gray.

Alexander McQueen designer Sarah Burton planted a collar of inky scrolls across the lapels of a white cotton officer coat to open the Alexander McQueen show, announcing its seafaring theme and her single-minded focus on tailoring.  Burton called hers a romantic take on sailor style, with some tempest roiling underneath the calm surface, musing: What compels men to map their life with ink?  The tattoo prints – mostly mermaids, anchors and compasses – also could be seen on shirt cuffs and pointy collars, or splashed across duster coats and trenches. 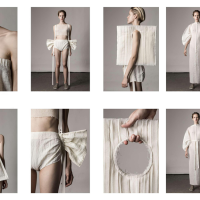 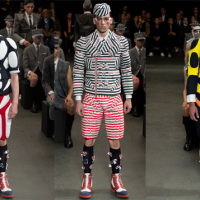