Fortune Magazine described Gawker and Vice as “the lawless cowboys of the new-media frontier, breaking all the rules and somehow getting away with it.”— but after a series of lawless behavior internally including sexual harassment and hostile work environment complaints as well as unfair wages complaints, the writers are said to have unionized in the hopes of creating a more stable environment.

In a statement released after the union vote, Vice founder Shane Smith said:

“I’m so proud of all my perfect diamonds here at VICE. Every single day your ideas and work continue to blow me away. I am proud to support all of you – and as an old grey-haired man all I want is for my beautiful VICE family to be happy – those writers who voted to unionize and those who did not. I love you all, and together we will conquer the world.”

It is heartening to see leadership support the decisions of their employees.

Situations like these can sometimes have a domino effect.  When one company is scrutinized or faces unionization similar companies find they are soon effected as well.

Where this could be a good thing is in Fashion.  The fashion industry is known for a “paid in trade” policy, even after they grow into big name companies worth billions. For example it’s no secret that many models get paid in trade, i.e. clothes.  In 2012 a controversial article about a Marc Jacobs model who was paid in trade surfaced on Huffington Post.  Marc Jacobs responded to the news periodical in a tweet stating “models are paid in trade. If they don’t want to work w/ us, they don’t have to.” 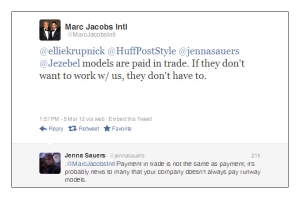 Are you surprised by his openness about it? I’m not.  Unfortunately this is a common attitude among the leaders within the fashion world but Marc Jacobs isn’t the only one.  Nor have these issues changed, the 2015 Washington Post article  spoke about “paid in trade” compensation in the model world to debunk the myth associated with the infamous Linda Evangalista quote.  The article suggests that models chose to accept clothes in lieu of payment for the possibility of international exposure and a campaign (that pays).  This hope is capitalized upon and exploited. The reality is only a few will be chosen, and regardless, the bottom line, this wistfulness shouldn’t deter the philosophy of work for compensation.   While owning a fabulous piece of Marc Jacobs clothing is all well and good, it will not pay your bills or put food in your mouth.  And to add perspective, Marc Jacobs company generates billions in revenue and went public this year.

The secret to a Fashion companies success is Brand Recognition.  The “name dropping” fashion articles, fashion videos and fashion editorials on the web racking thousands of likes fuel brand recognition, making designer brands a house-hold name. The editorials, videos and articles are typically done by submission and are rarely paid. The system designs it that way because fashion is such a popular industry.  And although,

in recent years, a slew of fashion brands have successfully turned to the public markets to raise growth capital and increase their overall net worth, most of them still take do not pay for creative works.

In June 2011, six months before the Kors IPO, Salvatore Ferragamo raised €380 million (about $429 million) on Milan’s Borsa Italiana in exchange for a 23 percent stake in the company, valuing Ferragamo at 24.4 times estimated 2011 earnings. Also in 2011, Prada raised €1.7 billion (about $1.91 billion) by listing 20 percent of its share capital on the Hong Kong Stock Exchange, valuing the company at €9 billion euros (about $10.2 billion), or 23 times 2011 earnings. And it is noteworthy that fashion retail groups such as H&M (HMb.ST), Zara’s Inditex (ITX.MC), Next (NXT.L), Marks and Spencer (MKS.L), Fast Retailing (9983.T) and Esprit (0330.HK) trade at an average of 11.5 times their expected EBITDA.  And yet still many of the contributing creative roles within the fashion industry are suffering from basic salary and security protection.

With media giants like Vice supporting unionization one can only hope this mindset will extend to the fashion world as well.  And any place it starts is a good start.